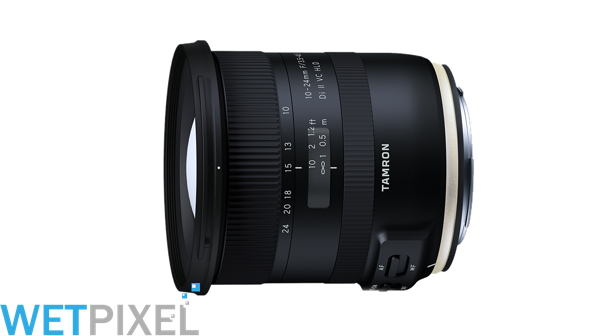 Tamron has announced their 10-24mm f3.5-4.5 ultra wide angle lens for cropped sensor cameras. It features Vibration Compensation, Fluorine coating and a “moisture resistant” coating. Minimum focus distance is 0.24m (9.4 in) and it is available for Nikon and Canon.

Model B023 is a wide-angle zoom lens that covers an exceptionally large range—the largest focal length range in its class(1) (35mm equivalent is 16mm to 37mm). The lens is ideal for street photography, landscapes, group photos and casual everyday scenes.

In 2008, Tamron launched the SP AF10-24mm F/3.5-4.5 Di II LD Aspherical [IF] (Model B001) that provided an unprecedented focal length range in its class. Building on that lens’s popularity, the successor Model B023 has improved optical performance and new features. It embodies Tamron’s most advanced technologies, including the VC (Vibration Compensation) system, Moisture-Resistant Construction and Fluorine Coating, and the first implementation of Tamron’s new HLD (High/Low Torque Modulated Drive Motor). Additionally, the Model B023 has a refreshing new design derived from the design of the new product lineup in the SP series.

The new Model B023 achieves a broad focal length range of 10-24mm, the largest range among ultra-wide-angle zoom lenses for APS-C DSLR cameras. This is the 35mm equivalent of covering a very wide angle of view, from 16mm ultra-wide angle to 37mm semi-wide angle. A photographer can enjoy diverse wide-angle expressions with just this one lens, from dynamic landscapes far beyond the normal human field of vision to simple, casual snapshots.

(1) Among ultra-wide-angle zoom lenses for APS-C DSLR cameras (As of January, 2017; Tamron)

The optical design of the new Model B023 consists of 16 lens elements in 11 groups. Special lens elements are utilized in an optimum configuration of one LD (Low Dispersion) lens element, one XLD glass element, one molded glass aspherical element, and one hybrid aspherical lens. While curbing an increase in the size of the optical system, the new lens very effectively compensates for a wide variety of aberrations in the entire zoom range, including transverse chromatic aberration, comatic aberration and distortions that tend to become more prominent with a wide-angle lens.

Vibration Compensation that is especially useful in low light conditions

In response to the requests of many customers who have asked the company to equip a wide-angle lens with image stabilization, we have now installed Tamron’s acclaimed VC (Vibration Compensation) on the new Model B023. Optimizing the actuator and the control algorithm has made it possible to incorporate the VC, while maintaining the compact design of the previous Model B001. The VC especially enhances the photographer’s freedom in handheld shooting at dusk or in a dimly lit room, and under other relatively low light conditions, as the mechanism proves particularly effective in the shooting conditions with slower shutter speeds.

Tamron’s new HLD (High/Low Torque Modulated Drive Motor) has been developed for use as the AF drive system for Model B023. With its outstanding driving power and stability, the HLD is capable of smoothly controlling the AF mechanism of the new Model B023 that is actually equipped with large focusing lens elements. When shooting in AF mode, the Full-time Manual Focus override allows you to instantly make fine focusing adjustments manually, without having to switch between modes.

Compressed into a compact body with structural ingenuity

While enhancing image quality, adding new functions and substantially improving the basic performance, Model B023’s space-saving design has ensured an optimum configuration for components such as the VC and AF unit, thus successfully reducing overall length compared to the previous Model B001. The lightweight and compact body with outstanding ease of use will prove to be very well-balanced when attached to an APS-C DSLR camera.

The front surface of the foremost lens element is coated with a protective fluorine compound that is water- and oil-repellant. The lens surface is easier to wipe clean and is less vulnerable to the damaging effects of dirt, dust, moisture and fingerprints, allowing for much easier maintenance. For greater protection when shooting outdoors, leak-proof seals throughout the lens barrel help protect your equipment.

An electromagnetic diaphragm system, which has been a standard feature for Canon-mount lenses, is now employed in Nikon-mount lenses(2). More precise diaphragm and aperture control is possible because the diaphragm blades are driven and controlled by a motor through electronic pulse signals.

The optional TAP-in Console provides a USB connection to your personal computer, enabling you to easily update your lens’s firmware as well as customize features including fine adjustments to the AF and VC.

External design placing importance on functionality and ease of use

While inheriting the design that makes use of a lot of organic curves and the delicately polished form down to fine details that characterize the SP lens series, the new Model B023 comes with a highly sophisticated design that also places much importance on the lens’s functionality and ease of use, featuring an overall form that faithfully encompasses the internal structures within, a slim Luminous Gold brand ring, the switch shape and the distance-scale window design. 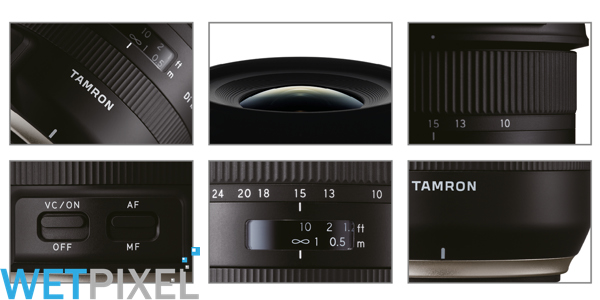