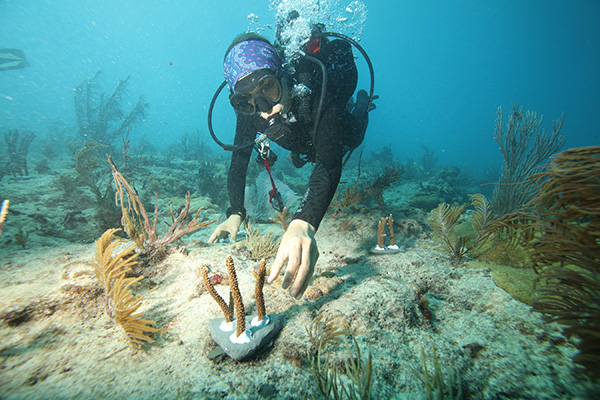 Canon USA has announced that it is participating in the University of Miami’s Rosenstiel School of Marine and Atmospheric Science coral reef restoration project. Canon team members, along with students and university staff embarked on an expedition to plant coral fragments from a nursery into an existing reef of Key Biscayne, Florida.

The steep decline of coral reefs has resulted in a sizeable loss of keystone coral species, several of which are now listed as threatened under the Endangered Species Act (ESA). Additionally, one-third of all coral species risk extinction, and three-fourths of the coral reef population, are considered highly threatened. Active reef restoration, such as this program, can help to recover these deteriorated coral populations. To kick off the program, students attended a half-day outing providing hands-on experience implementing coral restoration efforts. Led by University of Miami Rosenstiel School coral researchers, the 20-person voyage included a snorkeling and scuba excursion to a coral nursery to gather coral fragments that were then planted on an existing reef of Key Biscayne, Florida. The process of planting the Canon Reef included collecting small fragments of coral from coral colonies growing within an underwater nursery, preparing the corals to create additional colonies, and then outplanting resultant colonies on the pre-selected site.

This University of Miami program educates participants on the critical role coral reefs play in the environment and economy and the threats they face. In addition, it offers an opportunity to learn of the tools available for reef conservation and restoration, while conducting coral research.

“This Coral Reef Restoration Project is vitally important to our research efforts,” said Dalton Hesley, senior research associate at the University of Miami’s Rosenstiel School. “Our lab has worked relentlessly to understand the factors influencing coral growth and survivorship, and this initiative allows us to take even more significant steps in this endeavor.”

The environmental project offers Canon U.S.A., Inc. and Canon Solutions America, Inc. a platform to further build on their corporate commitment of sustainability. Canon’s dedication to conservation and the environment is reflected in its management structure and corporate culture.

“Canon’s contribution to the world community is founded on creating a better future for the next generations,” said Shinichi Yoshida, executive vice president and general manager, Canon U.S.A., Inc. “Our association with the University of Miami’s Rosenstiel School of Marine and Atmospheric Science allows us to help improve the sustainability and preservation of invaluable ecosystems.”

“Canon Solutions America is excited by opportunities to work with our customers and our parent company to support environmental and sustainability efforts,” said Peter Kowalczuk, President of Canon Solutions America. “This project exemplifies the notion of ‘Kyosei,’ the Canon corporate philosophy founded on the belief of all people, regardless of race, religion or culture, harmoniously living and working together towards the common good. We’re incredibly proud of our work with the University of Miami Rosenstiel School in its coral restoration and shark conservation pursuits.”

About University of Miami’s Rosenstiel School

The University of Miami is one of the largest private research institutions in the southeastern United States. The University’s mission is to provide quality education, attract and retain outstanding students, support the faculty and their research, and build an endowment for University initiatives. Founded in 1943, the Rosenstiel School of Marine & Atmospheric Science has grown into one of the world’s premier marine and atmospheric research institutions. Offering dynamic interdisciplinary academics, the Rosenstiel School is dedicated to helping communities to better understand the planet, participating in the establishment of environmental policies, and aiding in the improvement of society and quality of life. For more information, visit: www.rsmas.miami.edu and Twitter @UMiamiRSMAS.

Canon U.S.A., Inc., is a leading provider of consumer, business-to-business, and industrial digital imaging solutions to the United States and to Latin America and the Caribbean markets. With approximately $36 billion in global revenue, its parent company, Canon Inc. (NYSE:CAJ), ranks third overall in U.S. patents granted in 2018† and is one of Fortune Magazine’s World’s Most Admired Companies in 2019. Canon U.S.A. is dedicated to its Kyosei philosophy of social and environmental responsibility. To keep apprised of the latest news from Canon U.S.A., sign up for the Company’s RSS news feed by visiting www.usa.canon.com/rss and follow us on Twitter @CanonUSA.