Photogrammetry is defined as the science of making measurements from photographs or determining the geometric properties of objects from photographic images. In practice, it is a type of (now digital) imagery that uses a series of overlapping still images to build a computer-generated 3D model of an object or area. The technique can be used to recreate archaeological sites for study, track growth/conditions over time, and to give the general public an understanding of the underwater environment.

Apeks Van at Capernwray by Global Underwater Explorers on Sketchfab

Natalie Gibb in El Pit after our photogrammetry shoot

I was visiting the beautiful caves in Mexico’s Yucatan while my friends at Under the Jungle were hosting their inaugural Cave Science week. The head researcher, Patricia Beddows, tasked UTJ’s Natalie Gibb and me to carry out a photogrammetry survey of the rock strata on El Pit or Cenote Jacinto Pat. Natalie and I ran lines down the sides of a 30-meter section of the wall and added line arrows every 5 meters. We then shot a series of overlapping images covering the whole area of rock strata between the survey lines.

The resulting 42gb of images was sent to the Qualcomm Institute, at the University of California, San Diego, who as a part of their Cultural Heritage Engineering Initiative have proprietary software that can generate photogrammetry models. These processed our images and the resulting model clearly shows the strata of the walls on El Pit and will be used by scientists to analyze the way the cenote formed and to document changes to the cenote’s walls over time.

Subsequently, I enrolled in a Global Underwater Explorers (GUE) Photogrammetry class. It was run by instructor John Kendall, who was also responsible in large measure for authoring the course. GUE has been pioneering the use of photogrammetry to document historical wreck sites (like the Mars project), cave systems and artifacts.

The course consists of a combination of theory presentations and practical application. The practical includes the hands-on use of the Agisoft Metashape app and during the course, our team produced a series of photogrammetry models, both on the surface and underwater.

Our team used both video and still imagery to produce the models. Metashape will automatically “frame grab” still images at intervals from video and ingest these to create the models. Although rectilinear lenses are preferable (if only because they reduce the workflow), Metashape will also “de-fisheye” images captured with fisheye lenses and offer the option of lens calibration.

The first and most significant lesson is that shooting in RAW is a mistake. The post-processing advantages inherent in using RAW formats are largely negated by the pipeline that is used to generate the models. It is also hard to guarantee uniform color and exposure when post-processing, which can create issues when the software attempts to build its model.

Perhaps counter-intuitively, high resolution and image quality are not critical attributes. Each model combines multiple images, effectively generating very high-resolution imagery. Using cameras with very high resolution adds significantly to the processing time and has no obvious advantage. For example, with the D850, I ended up shooting in medium quality JPG.

More critically is that the images captured are well and uniformly lit. Both continuous and strobe lighting works well, with strobes being slightly preferable. It is critical that strobes recycle fast enough to ensure uniform lighting. If shooting with continuous light, it is a good idea to get team members to assist with lighting by shining additional lights onto the object.

Images must overlap by at least 80%, so slow steady continuous shooting is necessary. An intervalometer ensures that images are captured at a uniform pace. John has actually had one fitted to his (Easydive) housing as he is using a Canon camera that does not have it as a standard option.

This type of project is best done by sharing responsibilities between team members. These can include providing lighting as mentioned above and splitting the objects into multiple areas to increase the speed of the photo survey. GUE is very much all about diving in teams, and certainly building photogrammetry models is a good example of how sharing tasks can significantly improve efficiency.

In order to allow the software to align the image scans, it is possible to deploy survey markers (“ground control points”). These can be either scale rules or coded targets. It should be noted that this feature is only available in the professional version of Metashape.

During the class, we built three photogrammetry models. The first was a model of an ore cart on the surface:

John is an expert on Metashape and spent some time explaining how to get the best from it. There is no doubt that the software does struggle somewhat with underwater imagery and these hints and tips were invaluable. Metashape runs a series of processes to build the models. Initially, it imports the imagery (and creates stills from any video) and aligns the images. The software attempts to determine the relative positions that each image was taken from.

Once the software has aligned the images, it builds a sparse cloud of points that creates a “framework” for the 3D model.

As mentioned above, objects can be split up into different parts in order to reduce file sizes and to make image capture efficient. Metashape calls these parts “chunks” and can be tasked to align these to build a single model.

Once the sparse cloud has been built, the detail is added by using the imagery to fill in the gaps between the data points in the sparse cloud. This is quite intensive and can take a while. The more powerful the computer the shorter the process! The dense cloud can be edited.

The next step is to build a mesh. Metashape reconstructs a 3D polygonal mesh representing the object surface based on the dense or sparse point cloud. Again, this can be edited.

The last stage is adding texture. This can be based on the imagery that has been used to construct the model or generic color profiles.

Helicopter at Capernwray by Global Underwater Explorers on Sketchfab

Completed models can be used and viewed in a number of different ways. Sketchfab is a community of 3D modeling enthusiasts, that offers a venue for sharing models. they can be embedded onto websites and some can even be printed by 3D printers.

Photogrammetry is a fascinating and unique way of presenting the underwater world. It has value as a scientific tool, and the models have significant artistic and creative value. They also look really cool!

John’s expertise and the GUE course’s content provide a definite kick start for people seeking to get involved with this type of imagery. If this type of project is of interest, John’s experience and encyclopedic knowledge of the process is an amazing resource that will allow you to “short circuit” the process of trying to figure out how to do it! GUE’s emphasis on teamwork fits very neatly into the photogrammetry projects and helps make the training more productive. 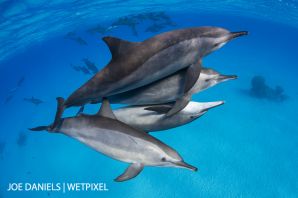 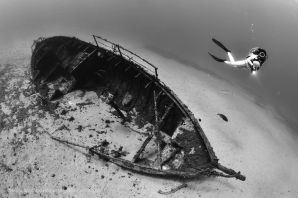 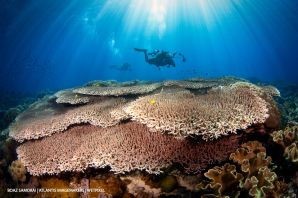