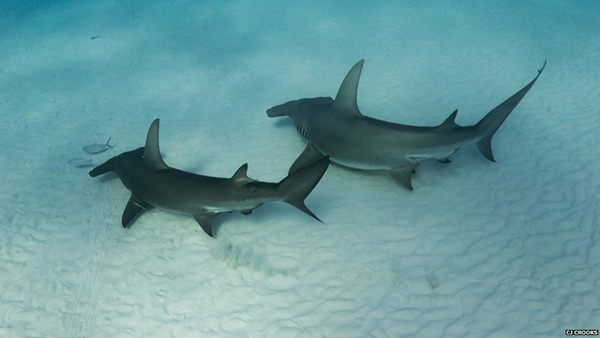 CJ Crooks of the Bimini Biological Field Research Station has produced a video of the Station’s recent efforts to track and study the population of great hammerhead sharks (Sphyrna mokarran) around Bimini, Bahamas. CJ says:

“The great hammerhead shark is a circumglobal species inhabiting warm temperate to tropical coastal waters. It occurs over continental and insular shelves, as well as adjacent deep waters and is thought to be highly mobile and migratory. The general life history pattern of S. mokarran is that of a long-lived (maximum estimated age 44 yrs), slow-growing, and late-maturing species. S. mokarran are a target or bycatch species in a wide variety of fisheries throughout their range and substantial population declines are suspected to have occurred in many areas as a result of fishing. This year S. mokarran were added to CITES (Convention on International Trade in Endangered Species) Appendix II and were categorised as endangered by the IUCN (International Union for the Conservation of Nature) Red List. There is very little known about the movement patterns and biology of S.mokarran in US and Bahamian waters. As such, research is needed to implement the correct management strategy to protect this charismatic species. Observations and captures of S. mokarran have been repeatedly and frequently documented at our study sites in Florida and the Bimini Islands.

In this short video we showcase our study site in Bimini, Bahamas and the low impact techniques that we are using to monitor and research this enigmatic shark species. Next year we will combine tracking and genetic data with modern analytical and ecological techniques to examine the conservation, habitat and space use of the endangered great hammerhead shark.”