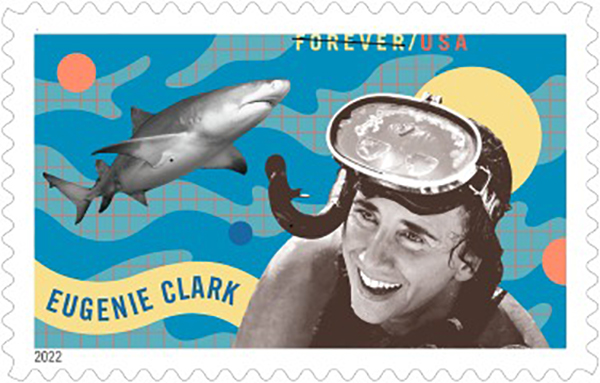 The United States Postal Service (USPS) has announced the release of a “Forever Stamp” celebrating the life of Eugenie Clark. The stamp features an image by David Doubilet. There will be a first day of issue event at the Mote Marine Laboratory, Florida on 4 May 2022.

Aquatic Scholar Eugenie Clark To Be Honored With Forever Stamp

Affectionately known as the “Shark Lady,” pioneering marine biologist Eugenie Clark (1922-2015) spent her career working tirelessly to change public perception about sharks as well as to preserve marine environments around the world.

A prolific scientist animated by an unyielding sense of curiosity, Clark conducted a series of groundbreaking experiments and carried out more than 200 expeditions across the globe. She demonstrated that lemon sharks could be trained to do complex tasks, disproved the notion that some shark species must keep swimming in order to survive, and debunked myths about sharks as vicious, fearsome creatures. She also made significant contributions to the study of hermaphroditism in fishes, discovered several fish species, and even found that one species naturally repels sharks.

Clark was widely respected for her research as well as for her eager embrace of new advances in diving technology, knowing that each development would bring her closer to the creatures she loved. A pioneer in the era when scuba emerged as a research tool, she later took more than 70 trips in high-tech submersibles, sometimes as deep as 12,000 feet beneath the ocean surface — something that has still been done by only a small number of other marine biologists.

An inspiration to scientists and laypeople alike, Clark left an extraordinary legacy. Her life and career blazed a trail for women marine biologists and continue to excite new generations of scientists and explorers. For her contributions to marine science, she received the Franklin L. Burr Award from the National Geographic Society and was honored posthumously by Congress in 2015. A species of dogfish shark newly discovered in the Gulf of Mexico was named Squalus clarkae in her honor in 2018.