BOOT, held in Dusseldorf, Germany, is the world’s largest watersports show. Held over 17 large halls, it showcases everything from yachts to surfboards. Diving occupies one hall, and an increasingly large number of underwater imaging product booths has created a specific zone in an adjacent hall, which includes the “Water Pixel” stage where a series of presentations on imaging-related topics are given. 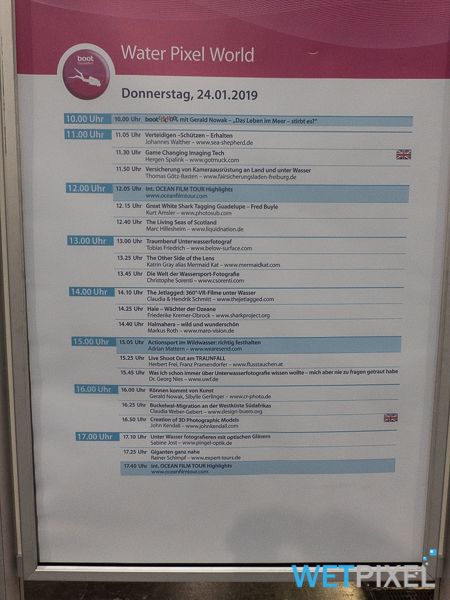 The show runs for 10 days, and is pretty much an endurance exercise for the exhibitors! Wetpixel is attending the show and will be reporting on what is new and exciting in the imaging zone.

The first port of call for the day was to Nauticam. Represented by Ryan Canon and Hergen Spalink, the pair took me through the always comprehensive range of housing and optics.

The Nauticam housing for the Black Magic Pocket Cinema Camera 2 will be shipping soon. The camera retails at around $1300 and offers the option of 4K 60p RAW. It uses micro 4/3 lenses, so has a wide choice of suitable lenses for use underwater. The newer version offers more manual control (as opposed to touch screen) and, along with other controls, the housing offers control of shutter speed, iris, and white balance via conventional levers, buttons and/or dials.

Battery life is a challenge with these cameras, so Nauticam has integrated a battery pack with 4 18650 lithium batteries into the housing which adds potential recording time of up to 4 hours. There is also space to add an SSD for external recording and a cheese plate for accessory attachment.

The housing uses Nauticam’s N85 port system, with a wide range of post and extensions available. Ryan and Hergen were stressing how well the camera integrates with the WWL-1 wet wide angle lens and SMC macro conversion lens. With the former (and a suitable micro 4/3 lens like the Panasonic 14-42), the camera offers a zoom through from 130° of coverage through to around 60°. 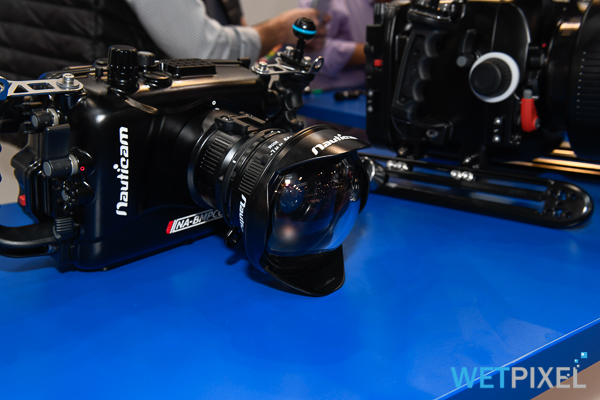 This allows for wide, medium and tight shots with one lens combination. If the SMC is then added, macro and super macro can be captured too….all on one dive!

The next housing we looked at was the NA-D850. Offers the familiar Nauticam control layout, with thinly new control being a separate lever that controls the focus mode button.

It is available either with Nauticam’s standard manual opto-electrical conversion board or the TTL version. The latter can also be used to offer TTL electrical control via suitable bulkheads. These plug into connectors on the board.

The MWL-1 (Macro Wide lens) is designed to be used with a 60 mm lens on full frame. It converts the field of view (FOV) to fisheye 130°, and when used in combination with an SMC-1 macro conversion lens, offer the option of shooting fisheye and macro images in the same dive. Nauticam is offering a new version of their double flip bracket specifically for this, with “beefed up” hinges to cope with the additional weight of the MWL-1.

Relatively new is the Nikon Z7 and Z6 mirrorless full frame cameras. Nauticam is shipping a housing for them (both camera models fit into the same housing).

The housing is slightly smaller and, perhaps crucially, the Nikon Z to F mount FTZ converter is integrated and located within the housing body itself.

This allows users to use their existing ports, extensions and zoom/focus gears, with no change needed.

The housing is equipped with 2 lens release buttons, one which is used with Z mount lenses, and the other for F mount used with the FTZ converter.

Another additional control is a small thumb-operated lever that allows the set to switch between the camera’s EVF and LCD screens for framing and composing.

Nauticam is offering a housing that supports all RED DSMC2 cameras. The RED range has expanded, with many sensor and processing options, but as long as the controls are DSMC2, the housing will be compatible. We chatted about the options, and the Gemini version seems popular with its “Dual Native ISO” option offering excellent low light possibilities.

Nauticam now have housings that support the RED TOUCH 4.7 and 7” monitor displays, both of which are powered off camera batteries. They also offer monitor backs that allow the monitors to be integrated into the back of the housing itself.

Another new monitoring option is a housing for the SmallHD 502B monitor. This offers 1000 nits of brightness (as opposed to around 500 for most monitors) allowing it to be used even in very bright conditions.

Optics for use with RED camera include the Nauticam WACP. This offers full zoom through, with compatible lenses offering from 130° to 60°. Hergen mentioned that they are now offering a specific version of the WACP for the Sigma 18-35mm f/1.8 ART lens. Optically identical to the “standard” version, it features an integrated extension and slightly longer buoyancy collar to accommodate the lens’ longer length.

Although it has been available for some time, Hergen mentioned how useful the ND filters on the Canon EOS C200 have been when shooting in bright conditions.

They then showed the housing for the Atomos Shogun Inferno recover/monitor. It features input via HDMI and Nauticam have invested in the tools that are needed to both produce and test HDMI cables in house. To output at the highest resolution and frame rate, it is necessary to use a continuous cable, without any connections.

Hence Nauticam is now adding an M24 port to some (new) housings to allow these cables to pass through the housing.

An example of this is their new housing for the Fuji XT-3 mirrorless camera. Capable of 4K 60p with color at 4.2.0 when recording internally, and with the addition of the Atomos recorder, color at 4.2.2.

It also offers HD.265 output. Designed for the serious enthusiast, it has an APS-C sized sensor. The housing has the above mentioned M24 port for HDMI output and uses the N100 port system.

It also features space for a 2500 mAh USB-C battery pack under the camera saddle. For still shooters, flash triggering can be either via the camera’s EF-X8 flash or Nauticam’s Nauticam Mini Flash Trigger for Panasonic/Fujifilm.

Next up was the new housing for the Canon EOS-R. Using the same design philosophy as that applied to the Nikon Z housings, the housing integrates the adapter into the body, allowing the use of existing ports, extensions, and zoom gears.

There are 2 lens release buttons to cater for this.

Canon is offering 3 versions of their adaptor, a “simple” one that does not add any functionality, one that has a “lens control ring” that can offer additional controls (like ISO) and lastly, one with a drop in filter mount that can have a variable ND filter added. Nauticam has added controls and gearing to allow these later 2 to be controlled from the housing. There is also a control that allows switching between the EVF and LCD. Flash triggering is via Nauticam’s existing hot shoe mounted manual or TTL flash triggers.

The NA-R also features a switch to allow changing between the EVF and LCD screen.

Featured at DEMA last year was another new optic that will be coming soon from Nauticam. This is an”endoscopic” type lens with a rectilinear 150° FOV.

Designed for use with 100/105mm macro lenses on a full frame camera, it is a wet lens with a bayonet fitting that is detachable underwater. It will have a minimum aperture of f/8. Hergen was at pains to stress that the version at the show is a prototype, and the production versions may well be significantly different from it.

In terms of compacts, Hergen showed me the housing for the Sony RX 100 VI. The camera has a zoom lens of up to 200mm, and to accommodate this, the housing uses the N50 port system.

There is a specific flip adaptor for this as the SMC-1 converter (designed for use with focal lengths of around 100mm) can be used to give a macro option. There is also an N50 bayonet port that can be attached (in place of the standard port) that then allows the use of the WWL-1 wide angle converter. There is not full zoom through, but a large part of the camera’s zoom range can be used.

Nauticam’s compact housings ship with stainless stabilizer brackets and trigger releases as standard, and there is a “Pro” kit option available that adds a vacuum valve, handles, and a tray.

Lastly, Hergen showed me some new 50 mm diameter carbon buoyancy arms. Available in a variety of lengths, these complement the existing 90 and 70 mm version.

Fabio Benvenuti and team were manning their busy stand. They kindly took the time to show me through their new products.

Easydive specializes in designing alternative methods of camera control. They housings offer control via USB or wifi, which allows them to be used with a variety of camera models. If the user upgrades their camera, upgrading the housing typically involves changing the housings control firmware via USB. The housing’s controls are mostly piezoelectric and do not penetrate the housing, avoiding the issues associated with extreme depth and pressure.

The first is housing for the Black Magic Smart View monitor/recorder.

Easydive adds an HDMI to SDI converter to the housing and then connect the monitor via a waterproof SDI. SDI is a much more robust connection than HDMI.

The converter has two channels, and the second can supply another monitoring option, like a surface feed, if required. The solution currently works with Canon mirrorless and the Panasonic GH5 cameras.

For Sony cameras, Easydive has added a novel method of getting a video food out. They take the video feed out of the camera via HDMI and then use a wifi connection in the housing, with a receiver that then feeds via a wire to a permanently housed smartphone.

The wire has 6 channels, of which two are used for the video feed, and the reading ones are used for charging the monitor. The monitor displays current exposure settings and the video record icon and can be used with the camera’s LCD monitor simultaneously.

Easydive has also released a new app for their smartphone housings. The PowerShot Pro app is compatible with all iOS and Android smartphones and adds additional functionality.

Easydive offers the LEO3 Smart 150m compatible housing. This has some buttons for control, an internal battery pack and is supplied with a conversion lens.

The Diveshot housing offers control via optical sensors and is depth rated to 60 m. Both housings have double O ring seals.