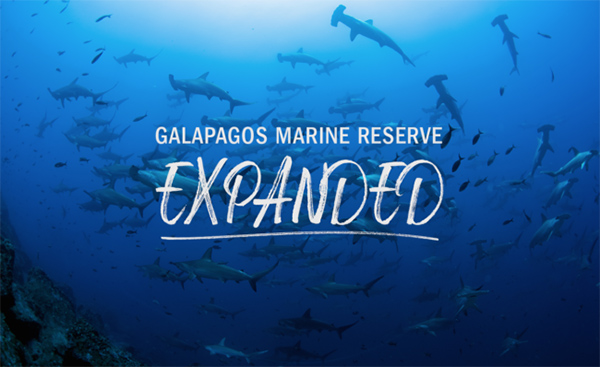 The Galapagos Conservancy celebrates that President Guillermo Lasso has announced a dramatic 45% expansion of the Galapagos Marine Reserve, which includes a protected swimway from Galápagos to Costa Rica.

From The Galagos Conservancy

Galápagos Conservancy is thrilled that Ecuadorian President Guillermo Lasso has expanded the Galápagos Marine Reserve by 14.8 million acres (23,166 square miles), including the creation of a protected swimway from Galápagos to Costa Rica.

President Lasso announced the declaration, which expands the GMR by 45%, at the COP26 climate summit in Glasgow, Scotland, earlier today. The new protected area is 2.5 times the size of Maryland and covers more water surface area than Lake Michigan. The total size of the marine protected area now extends 47.4 million acres (74,000 square miles).

The declaration also creates an essential migratory corridor that bridges the gap between the protected waters of the Galápagos Marine Reserve and Costa Rica’s Cocos Island National Park. This previously unprotected band of water in the Eastern Pacific, known as the Galápagos-Cocos Swimway, is an underwater superhighway for an array of threatened and endangered migratory species like Whale Sharks, Scalloped Hammerhead Sharks, Manta Rays, Sea Turtles, Tuna, and many more that pass through the oceanic thoroughfare. By securing this biodiversity-rich space between the two marine UNESCO World Heritage Sites, a major vulnerability for marine wildlife that has previously been a haven for industrial fishing, including shark finning fleets, has been eliminated. We expect that populations of these threatened and endangered species will soon begin to rebound, and we hope that this agreement between Ecuador and Costa Rica will serve as a model for multinational collaboration in marine conservation going forward.

This is a historic moment for Galápagos and a major victory for global marine conservation. Many organizations, including Galápagos Conservancy, were active in pushing the Ecuadorian government to take this important step. We also owe a special note of gratitude to our close collaborator Dr. Alex Hearn, creator of our Shark Count app, whose research on the importance of this swimway elevated the issue to global prominence.

Galápagos Conservancy is committed to stepping up to ensure the protection of these newly established sanctuaries. We will continue to provide financial support for the Galápagos National Park’s GMR patrol boats and are already planning to implement a number of new marine projects in 2022, including awarding more grants that focus on marine conservation than ever before.

Although conservation work is never done, today we can celebrate a major victory for Galápagos and for our planet.