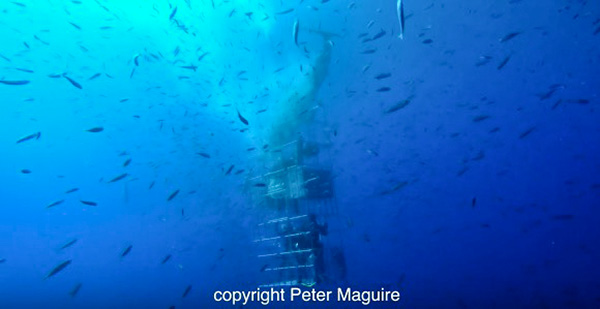 There is a fair amount of confusion about the events at Guadalupe Island, Mexico that are being depicted in 2 videos that are doing the rounds at present. Both depict great white sharks (Carcharodon carcharias) entering cages during dives when there were divers in them.

The first incident occurred in September and involved a group from Bluewater Dive Travel aboard the Nautilus Explorer liveaboard while a second and separate event occurred on October 4 aboard the Solmar V. Neither incident resulted in any loss of life or injury to the crews or guests involved.

In the case of the incident involving the Nautilus Explorer, the shark entered a submerged cage from the top. Images of the event clearly show bags of chum attached directly to the cage, and it is likely that the shark simply mistimed its lunge for one of these. In this instance, the result was extremely dangerous for both the divers in the cage and the shark itself. After the cage had been retrieved to the surface and the divers evacuated from it, the shark itself remained wedged in the cage at the surface until a line was passed around its tail, the cage dropped back down to depth and a divemaster squeezed the shark’s gills to allow it to escape.

The goal behind placing bait close to the cage it to “encourage” the sharks to pass closer to the cage, allowing for closer interactions with the occupants.

To date, Nautilus has not published a statement about the event, although those on the trip have posted an account of their experience.

Solmar V has already posted a detailed statement regarding the second incident. Although there was no bait attached to the cage (which was at the surface), once again a shark seems to have mistimed its lunge for the bait that was being wrangled some 2m (6ft) or so off the front of the cage. The shark was unable to stop in time and crashed through the observation window of the cage, breaking one of the bars and this allowed it to enter the cage. Solmar’s crew opened the cage’s top hatch and the shark escaped spontaneously.

Although it is hard to be sure, whilst obviously very traumatic, neither incident seems to have done any significant harm to the sharks involved.

Cage diving with great white sharks is entirely legal and tightly controlled at Guadalupe. There is a Guadalupe shark-diving code of conduct, put in place by the National Commission of Natural Protected Areas. It is certain that both incidents will cause all activities at the site to be closely scrutinized by the relevant authorities. In the meantime, it is perhaps unhelpful to attempt to ascribe blame to any of the parties involved until these investigations have been completed.